Root serves a valuable role on Person of Interest. Harold Finch, The Machine’s creator, wants his baby kept hidden from the public and the government that uses it. Root is a hacker, not opposed to The Machine’s electronic dragnet but angry at Finch for keeping it locked away. POI fans crave more information about The Machine — what it looks like, where it is, how it works — information that Finch would never give us. Root is the fans’ voice for wanting those answers and the driving force behind the stories that reveal them.

Her character began with misdirection: An otherwise ordinary number-of-the-week is manipulated into killing a U.S. Congressman, but after peeling back the layers we learn the story we thought we saw was not the story we were supposed to see. The killer was set up by a mysterious hacker, Root, as part of a “honey trap” to lure Harold into a scenario of her making from which she could access his systems and get closer to The Machine.

Not content, Root tricked the team again by setting herself up as a NOTW so she could kidnap Harold at the end of season one. Season two began with her holding Harold and Denton Weeks hostage. Weeks commissioned the project that became The Machine, leading Root to believe he or Harold knew its location. She shot Weeks when he refused to give it up and Reese saved Harold after Root escaped. She later popped up as Special Counsel’s secretary before forcing Harold to take her to where The Machine was supposed to be. When it wasn’t there, she suffered a psychotic break prompting Harold to put her in a psychiatric hospital.

Last week Root reappeared after escaping the hospital, and this week’s episode will be about what she does next. Her time in the hospital and her unprecedented relationship with The Machine deserve a deeper look.

Root ended last season wandering through the halls of Stoneridge Hospital. A pay phone rings. She picks up the handset, yellow with a blue seal around the cord, and hears a familiar question, “Can-you-hear-me?” “Absolutely.” It was the same question she and Reese heard when The Machine rebooted after Kara Stanton uploaded a virus meant to take it down. The reboot triggered a 24-hour “God mode” during which Root and Reese could communicate with it directly. We saw the 24 hours end when Root couldn’t retrieve a key code to open a door in the nuclear facility where The Machine was hidden. That’s what made the call to Root in the season’s final scene so perplexing; God mode was supposed to be over but here was the same voice asking her the same question.

This season we saw the same scene through The Machine’s eyes. Root knew about The Machine when she answered the phone so it gave her the usual yellow box as it“retasked,” the asset. The moment she said, “Absolutely,” the box changed. The corners and crosshairs remained yellow but the rest of the outline turned black and she was given a new designation: ANALOG INTERFACE. Here we have to turn to Pedia of Interest:

Black box with yellow corners and crosshairs: Possibly indicates individuals who not only know about the Machine, but have the ability to communicate with it. The Machine internally designates these individuals as “Analog Interface.” 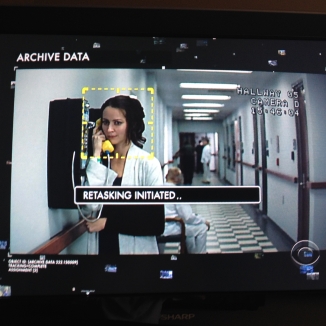 Root can now communicate with The Machine similar to the way she did under God mode, but at a new level. Her sessions with her psychiatrist, Dr. Ronald Carmichael, detail how complete their communion is.

In the season premiere:

Root: “I have a direct line to a higher power. It speaks to me.”

Dr. Carmichael: “What are those voices telling you to do?”

R: “It’s just the one voice really. It wants me to stay here and work thru some issues.”

Dr.C: “What issues would those be?”

R: “Methodology, we’re discussing how I go about things.”

Dr.C: “Do you have feelings like you’re being watched?”

Later, after Dr. Carmichael takes away her phone:

R: “I’m sorry, doctor, but it’s important we be in contact. We’re in the middle of a…disagreement.”

Dr. C: “A disagreement with the voice? I know you believe you need a phone but I am here to tell you that you don’t. I believe that by separating you from it and all other forms of technology it’s really the best course of action. So it’s time to unplug.”

He orders her to solitary confinement.

R: “For a psychiatrist, you’re really a terrible judge of character.”

Near the end of the episode Root shocks the doctor:

R: “The truth? The truth is a vast thing, I see that now. Just how much truth there is. Where would we even begin? The truth is you are not very smart. In fact, you’re only the 43rd smartest person in this building.”

R: “Every standardized test you ever took averaged together not including your medical boards, which you cheated on. The truth is you smoke an average of 9 cigarettes a week in the parking lot when you think no one’s looking. The truth is you visit a massage parlor once or twice a month and you pay for it with crisp hundred dollar bills that you get out of the cash machine at the 7-11 across the street. The truth is that you fantasize on online forums about having sex with some of your patients. Though not me, yet. I guess I’m not your type. The truth is, God is 11 years old, that she was born on New Year’s Day 2002 in Manhattan. The truth is that she’s chosen me, and I don’t know why yet. But for the first time in my life I’m a little scared about what’s gonna happen. The truth is I’m stuck here for now and the only dialogue you need to be worried about is between me and her which is why you might want to give me my phone back. Because I’m having an argument. Would you like to know the truth, doctor? About what we’re arguing over? Whether or not I’m gonna kill you.”

Several noteworthy things pop out of her dialogue. She got all of this information despite  being in solitary confinement without her phone. How? The date she mentions, January 1, 2002, is when Finch first began teaching The Machine how to recognize subjects. The most notable piece? She and The Machine are arguing, implying real-time two-way communication through the “Analog Interface.”

The analog interface then sounds like exactly what it sounds like: A way for The Machine to communicate (interface) with Root without the apparent need for a digital (analog) connection. To do this, The Machine “retasked” her, an audio term meaning it changed her function to handle a different input. What type of input? We aren’t yet sure. In episode three Root describes her (h/t Joan Osborne) as merely a voice:

R: “You know that’s a good question. I’m not certain yet.”

Dr.C: “Because the voice is going to tell you?”

“Is the voice speaking to you right now?”

Doctor Carmichael points out her phone isn’t connected to a wireless carrier.

R:“God doesn’t need AT&T. Haven’t I already proven to you just how powerful she is? It’s not a condition, it’s the future. By the time you figure out what’s really happening, I’ll have transcended this reality.”

Presumably not being connected to a carrier is no obstacle for The Machine. The opening sequence of every episode shows it connecting to the wifi card in Reese’s camera.

What does her last sentence mean? It sort of feels like a message to the viewers. By the time we realize how The Machine has changed it will be too late.

Root’s next scene shows how the two interact. Through the dead cellphone she instructs The Machine to control a prescription dispenser by having it entering the password and dispense three vials of Desipramine, an anti-depressant. Her escape plan is underway.

Then The Machine appears to take on a dual personality. While it helps Root engineer an escape plan it also predicts it will turn violent, prompting it to find Harold and warn him. My guess is this is The Machine making sure Harold gets to the hospital before Hersh because Root he is a danger to Root. But who knows? Anything could be on the table at this point.

Maybe Root isn’t dealing with The Machine at all but rather a “bad twin” or offspring unintentionally created by the reboot. Maybe the relocation spread its servers across different sites and each site is developing its own intelligence. Maybe, juuuuuuust maybe, Harold cleaved its artificial psyche when it split the phone call so Root and Reese could interact with it in God mode?

2 thoughts on “Person of Interest: Digging up Root”