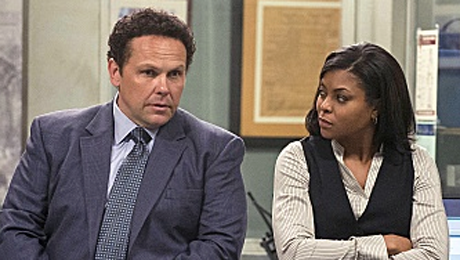 It’s not a spoiler to say Lionel Fusco is in trouble. The trailer for the three-part Person of Interest sweeps series puts it right out there for us:

I love Fusco, you love Fusco, we all love Fusco. But, like the best ice cream cone you’ve ever had, Fusco is melting under the heat of HR. That was a painful analogy, and I’m sorry for making it. I was going to do up a long preview post, but this piece from TV Guide online covers most of it. Jonathan Nolan goes out of his way to not confirm that Fusco is the odd man out but he’s not fooling anyone. Take this statement:

“We promised all of our actors a journey with their characters. And a journey means a beginning, a middle and, sadly, an end.”

Fusco is the only character who meets that condition. He began, like Nolan says, as a bad guy. His journey began when Reese flipped him in the pilot and later, in season one’s Blue Code, kept him as his eyes and ears inside HR. He spent the next two seasons not fully in but not quite out. He had every opportunity to turn on Harold and Reese (and even his partner, Detective Carter) but he didn’t. Why?

The answer is found at the end of Blue Code. After being caught accessing the file of an undercover cop, a guard on HR’s payroll marches Fusco out to the woods. With a gun to his head, Lionel says:

That is the arc of Lionel Fusco. He thought his death was at hand in the series premiere as a dirty cop whose truth would crush is young boy. From that moment on, under Reese’s direction, Lionel made his mission “to go down doin’ somethin’ good.” With his Endgame now becoming evident, I hope his death is a heroic one. I am certain that when we see Lionel’s final moments he will be content to know that he completed this journey of redemption for his son.

One last tidbit. The first episode of this three-part series is titled Endgame. The episode near the end of season two that saw Fusco finally and fully break from HR’s grasp? In Extremis, or finality at the point of death. From the moment Carter and Bear moved Detective Stills’ body to keep Fusco alive, his fate in the show was sealed.

I need a minute. #PersonOfInterest

As Carter drove to the judge’s house to get the warrant for Quinn’s arrest I felt like the show pulled a great misdirection on us and was going to kill off her instead of Fusco. The judge was crooked, and as they stepped Joss onto the tarp I screamed at my TV, “Reese? REESE?!?” Having the rug pulled out from under my assumptions like that is one of my favorite things a show can do to me. Much to my relief, Reese was waiting outside but after clearing out Quinn’s goons he made a disastrous mistake: He got caught on a squad car’s dash cam. (I thought he had been sloppy all season in his appearing at crime scenes to talk to Carter.) Simmons, who I hope really gets good and dead during all this, found it and put a hit on him. This week’s episode deals with Reese’s number being up.

But let’s be real: They aren’t killing off Mr. Reese. It’s still going to be Fusco and it appears that it will be tonight:

I’m leery of making predictions but I can see at least two tactics HR could use to put Lionel in grave danger. First, he knows how to contact “the man in the suit” who is now atop HR’s hit list. By forcing him to choose between his life and Reese’s, Fusco would get the chance to prove that his mortal loyalty is to good. Or, HR could get wind that he has a key to the safe deposit box where Carter stashed copies of everything she learned about the organization. Give up the key or die. If I had to bet money I’d put it on the first one.

In this extended clip from CBS, Michael Emerson said the writers gave him three scripts for who could be the one.

So we will have to wait until the very end to see it. I am just glad it is happening this week, not next week when I’ll be at my parents’ house. I will surely cry for Lionel and I don’t need them to see that.